This ESD-safe TS101 soldering iron with active tip is the successor of the well-known TS100. This is a USB/DC5525 powered soldering iron, which has a maximum power output of no less than 65W! This allows the TS101 to reach a temperature of 400 °C within 9s. In addition, the soldering iron is equipped with a very slim handle and an OLED screen. The iron can be powered with 9 - 24 V via the built-in DC5525 connector and 9 - 20 V via USB-C. Both connections allow for flexibility in power selection as the TS101 can be powered via a socket or through a battery.

An anti slip cap is included which also features a quick and easy tip replacement method. The software of the TS101 is open source, so it is easy to make adjustments to it. It is quite easy to create your own temperature curves, or to program a specific response.

This soldering iron comes with a conical tip, its type number is TS-B2. The TS101 makes use of the TS100 soldering tips.
Buy your TS101 soldering tips here 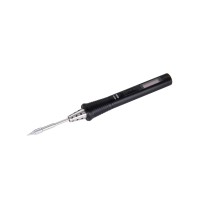 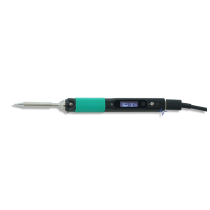