The JBC CDE soldering stations are high-quality stations that use revolutionary technology. The JBC CDE-B has an assisting mode which analyzes your soldering joints in real-time, in order to improve the soldering process. You can set your own reference soldering profile, comparing each subsequent soldering with it. In this way the station gives you feedback, to make the soldering process more efficient. The desired profile can be set or adjusted via the USB connection.

The CDE stations are equipped with a high peak power of 150W, which brings them up to temperature quickly. The most important feature of JBC soldering stations is that they use active tips. The advantage of this is the fast warm-up time, but also, as can be seen in the second picture, a much higher temperature stability during soldering. Because the heating element and the temperature sensor are embedded in the tip, the temperature is better regulated and the difference in temperature between the tip and the rest of the iron is minimal. In addition, it is possible to replace the tips without letting them cool down first because there is a tip changing aid built into the station.

The soldering tip is not yet included. These can be found via the blue button on the page. The CDE-B is delivered including the T245 soldering iron, which makes this station widely usable for coarse as well as fine work.
If you are looking for a station that is more suitable for precision work, take a look at the JBC CDE-S .

For a cleaner and healthier working environment, Eleshop recommends an extraction pipe, such as the JBC F3435 in combination with a vacuum pump, such as the AOYUE 933. 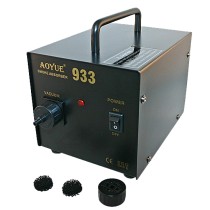 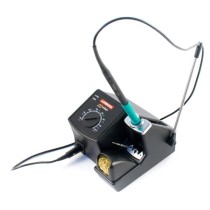 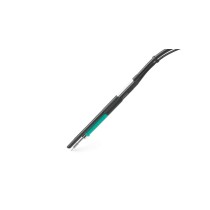 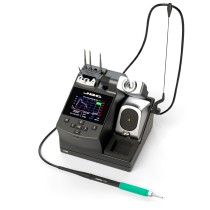